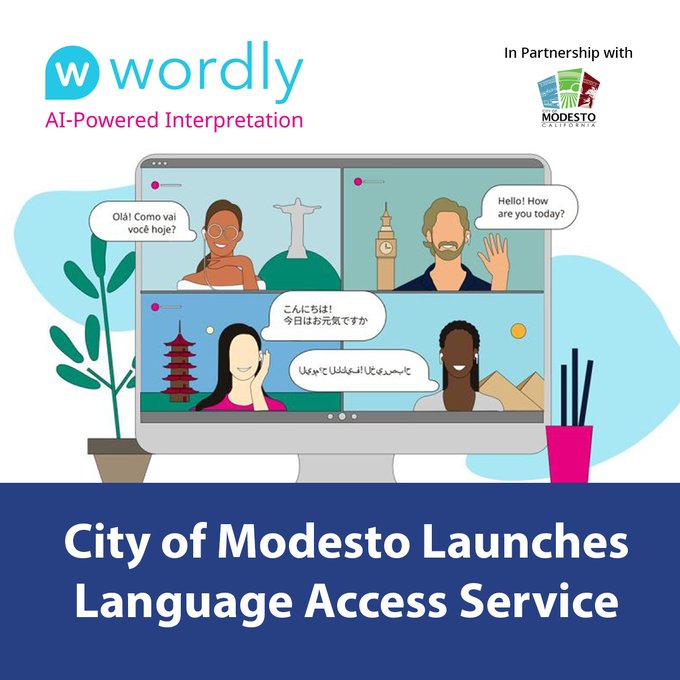 The city of Modesto, CA announced the official launch of a new language access service (powered by Wordly) now available to residents to engage in city council meetings. The partnership between Wordly and Modesto was featured on an ABC10 Newscast on July 13, 2022.

The Wordly AI-powered translation platform provides real-time translated captioning and audio to meeting participants, enabling members of the local community who don't speak English a chance to listen and participate in city council meetings over Zoom.

Wordly interprets from English plus 14 other top international business languages into 25 different languages and is designed to promote transparency and engagement between city management and residents, according to the city of Modesto. Each participant can select their own language and listen to the live translated audio or read captions on their own phone, tablet, or computer.

A portion of the Modesto interview with ABC 10 is provided below:

“We have a significant portion of our community that speaks Spanish, and then there's others that speak many other languages,” Modesto Deputy City Manager Scotty Douglass said. “This is a service that allows them to see it in other languages as the meetings are live so that different people can participate.”

After hearing concerns from the diverse community of Modesto, city council began quickly searching for solutions.

About 40% of Modesto's population is Hispanic, according to the U.S. Census Bureau. Many in that population speak Spanish.

“Some of the solutions in the beginning was providing more people available at the Council meetings that spoke other languages like Spanish,” Douglass said. “But all the while we were searching for a more consistent solution that was technology based.”

The city spent the last three months testing and preparing the language access service for public use.

“A lot of other cities are using people to do that service and most of them are doing that on a request basis,” Douglass said. “We wanted to be able to make this a consistent thing that we could do for our community.”

Using AI-powered technology, Wordly can be accessed through a QR code that will give a participant the ability to choose a language to be interpreted during the Zoom session.

“It's a cloud-based service we run through Zoom and it connects to this third-party service,” Douglass said. “It essentially pushes the audio to this other service, and they take that audio that's in English in this case and then it provides the option for translation.”

Wordly also allows members of the community to join the city council meeting in person, while using the software through Zoom as a real-time translator.

Wordly works for a wide range of use cases:

Learn more about the Wordly City Council Interpretation solution by visiting our website, or schedule a personalized demo to see how the solution can work for your use case.